Marine energy – also referred to as ocean energy, ocean power and marine hydrokinetic energy (MHK) – encompasses various means through which energy can be harnessed from our oceans. There are various types of marine energy, including wave, tidal stream, tidal range and offshore wind, as well as ocean thermal, ocean current, run-of-river and salinity.

At EMEC, we provide test sites for wave and tidal stream energy converters, so when we refer to marine energy we are referring specifically to these two ocean energy sources.

What is wave energy?

Waves are formed by winds blowing over the surface of the sea. The size of the waves generated will depend upon the wind speed, its duration, and the distance of water over which it blows (the fetch), bathymetry of the seafloor (which can focus or disperse the energy of the waves) and currents. The resultant movement of water carries kinetic energy which can be harnessed by wave energy devices. 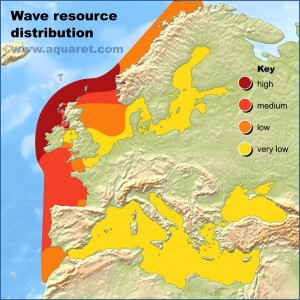 The best wave resources occur in areas where strong winds have travelled over long distances. For this reason, the best wave resources in Europe occur along the western coasts which lie at the end of a long fetch (the Atlantic Ocean). Nearer the coastline, wave energy decreases due to friction with the seabed, therefore waves in deeper, well exposed waters offshore will have the greatest energy.

There are many designs being pursued by developers to harness the power of waves. Visit Wave Devices for an overview of the different concepts currently in development.

What is tidal energy? 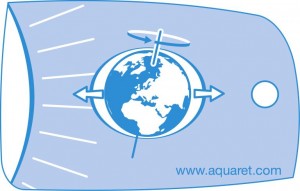 Tidal streams are created by the constantly changing gravitational pull of the moon and sun on the world’s oceans. Tides never stop, with water moving first one way, then the other, the world over. Tidal stream technologies capture the kinetic energy of the currents flowing in and out of the tidal areas. Since the relative positions of the sun and moon can be predicted with complete accuracy, so can the resultant tide. It is this predictability that makes tidal energy such a valuable resource. 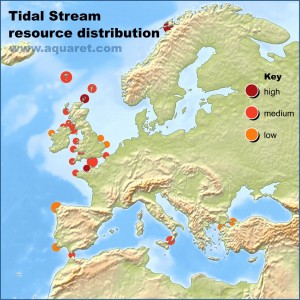 Tidal stream resources are generally largest in areas where a good tidal range exists, and where the speed of the currents are amplified by the funnelling effect of the local coastline and seabed, for example, in narrow straits and inlets, around headlands, and in channels between islands.

Marine energy in the UK