The RESOURCECODE project, funded by Ocean Energy Era-Net Cofund, has made a significant step forward with the first year of hindcast data being produced for the project’s marine data toolbox and the development of the new online platform.

RESOURCECODE aims to support the investment and growth in the wave and tidal energy sector through the creation of an integrated marine data toolbox.

The toolbox is due to be launched in 2021 using 28 years of hindcast wave data from across North West Europe. It will provide technology developers and supply chain companies with world leading resource characterisation, enabling them to improve engineering designs, optimise operations in highly demanding marine environments, and increase investor confidence.

IFREMER, partner of the RESOURCECODE consortium, released this preliminary dataset by running WaveWatch III® after having implemented a specific configuration of the model. This one-year preliminary dataset will be used by all the partners of the project to finalise the validation of the model against in-situ wave buoys and remote sensing datasets (altimeters and SAR).

The year 2017 was selected for this first test as it provides the largest number of relevant in-situ and satellite reference datasets at the disposal of the project partners, allowing for a more thorough validation.

The configuration of the RESOURCECODE model is based on a high resolution unstructured grid (composed of triangles of different sizes depending on location and water depth) , extending from the south of Spain to the Faroe Islands, and from the western Irish continental shelf to the Baltic Sea. Forcing winds are extracted from the ERA5 database while the currents and water levels are recomposed from a database of harmonics of tidal currents (MARS and FES2014 models).

Ultimately, the RESOURCECODE partners will produce a 28-year metocean database covering the period from 1993-2020 with an hourly time step. A set of 39 global parameters, as well as the frequency spectra, will be made available as an output at each of the 328,000 nodes of the grid, while directional spectra will be made available on a coarser grid.

As an example, the figure hereafter provides a mapping of the significant wave height yearly mean for the year 2017. 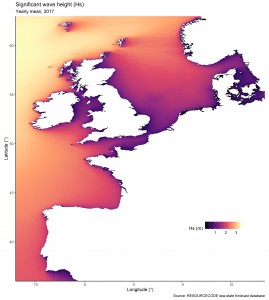 “The delivery of this one-year dataset is a major step forward in the development of the RESOUCECODE toolbox. The preliminary evaluation of the model configuration shows significant improvements compared to other existing databases.

“We are confident that the final 28-year dataset, combined with the RESOURCECODE marine data toolbox will provide the most adapted and integrated solution for ocean renewable energy developers.”

The RESOUCECODE toolbox will be available on a new online platform and will enable easy access to the data, while the extended implemented library will allow online analysis dedicated to refined resource assessment and offshore energy converters design and optimisation. 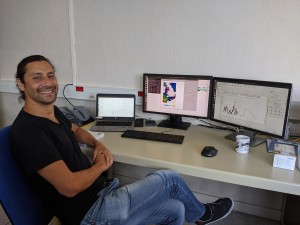 Matias Alday, Research Engineer at IFREMER, is in charge of the development and validation of the model configuration implemented to build the RESOURCECODE wave hindcast database