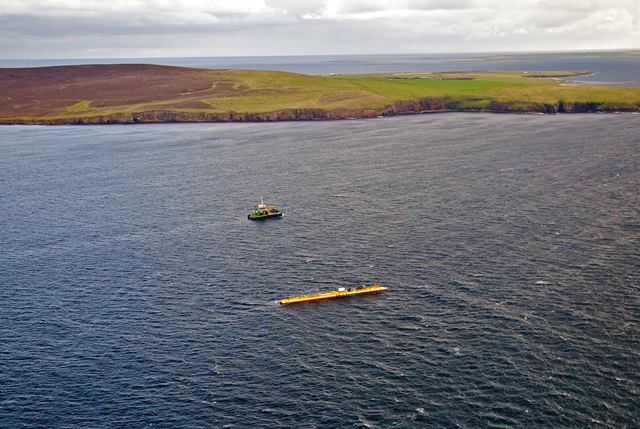 Scotrenewables welcomes new investment and director appointments ahead of starting a new turbine build which will see an optimised 2MW floating turbine installed at the European Marine Energy Centre in Orkney. The multi-million pound investment is led by a private investor group including the McGrath family, sector leader Matthias Haag as well as ongoing public sector support through the Scottish Government’s Energy Investment Fund.

As an award winning technology developer and investor Matt McGrath brings significant business experience, having built and operated his own equipment manufacturing business, Scotland and Hong Kong based Aircraft Medical, with operations in over 50 countries before its $110m sale in 2015.

Matthias Haag’s most recent role was Chief Executive Officer of Gemini, one of the largest offshore wind parks in the world. The 600MW Gemini wind park has been built under his leadership over the last three years and is now providing revenues of about €400 million per year. Gemini was project financed with € 2.8 billion by more than 25 global banks, the EIB and three Export Credit Agencies.

McGrath family investors include Sian George (née McGrath) who has Chaired the Board of Scotrenewables since February 2016, and will continue to do so. As a sector investor Sian George is a proven leader in the energy technology and services sector. She was previously the CEO of Ocean Energy Europe, the trade body for ocean renewables in Europe. Since joining the marine energy sector in 2005 she has served on several advisory boards for the UK government and European Commission.

“As we enter a new exciting phase of turbine build and commercialisation, the new appointments add significant industry and commercial experience and I’m looking forward to having their support and input”.

“We have been involved in the renewable sector for some time and have developed a strong belief in floating tidal stream converters. The recent records achieved by Scotrenewables are a demonstration of a platform technology that works, and with time we see it has enormous potential”

“I am delighted that Scotrenewables Tidal Power has secured private investment that will support its ongoing development so soon after it announced that its ‘SR2000’ tidal turbine in Orkney – the most powerful turbine deployed in the World – has already generated 3GWh of electricity to the grid in the past 12 months.

“Scotland continues to lead the World in the development and deployment of tidal stream technologies and this latest investment is yet more evidence of the strength of Scotland’s marine energy sector; a sector that has a potentially significant role to play in the energy transition, both at home and in international markets.”

“As a valued client of EMEC’s, we are delighted to hear of the private investment from the McGrath family. Scotrenewables have hit some incredible milestones and we look forward to see what other industry firsts the company can achieve with the development of the SR2-2000 device under the FloTEC project.”

The new investment leads on from an exciting year for Scotrenewables which saw their SR2000 tidal turbine generate in excess of 3GWh of renewable electricity. Next on the agenda is the delivery of the second-generation tidal turbine – the SR2-2000 which is supported by EU Horizon2020 funding under the FloTEC project. The SR2-2000 is scheduled to be launched next year and deployed at EMEC’s Fall of Warness tidal test site in the early part of 2020.