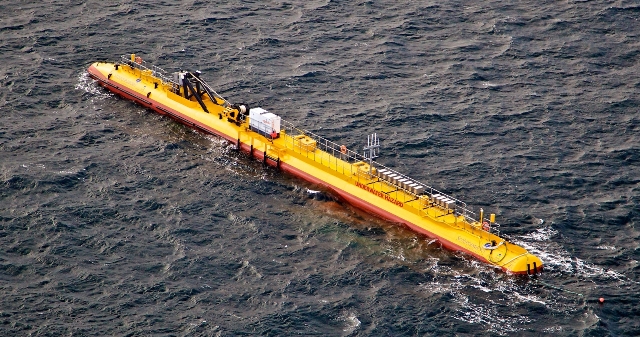 SR2000 floating tidal turbine produces 116MWh in less than a week of continuous generation: around 7% of Orkney’s electricity demand in that period

The SR2000 produced more than 116 MWh in under a week of continuous generation which took place last month. Over a seven day period, the turbine met the electricity demand of nearly 7% of the entire Orkney Islands, with shorter periods where that contribution exceeded 25% of demand.

Speaking about the performance of the SR2000, the largest and most powerful tidal current turbine in the world, CEO of Scotrenewables, Andrew Scott, said:

“We are tremendously pleased with these latest results from the test programme. The SR2000 has met, and in many instances exceeded expectations, and combined with the fact this is the world’s most powerful operating tidal turbine it means we’re making a material contribution to the generation mix in Orkney with just this single unit.”

“I visited Orkney a year ago just as Scotrenewables was starting its test programme for the SR2000 turbine at EMEC. I am delighted to hear that the SR2000 has passed the seven day continuous generation test with flying colours and is exporting an impressive amount of power to the Orkney grid – meeting nearly 7% of electricity demand for the Islands in the process.”

The SR2000 project has been supported by Scottish Enterprise’s WATERS II scheme along with investments from Scotrenewables’ shareholders which include ABB, DP Energy, Fred Olsen, Total and Scottish Government via the Renewable Energy Investment Fund (REIF). The testing programme at EMEC is also supported via the FORESEA Interreg-NWE funded project.

Going forward, Scotrenewables has been selected by the European Commission to lead on the engineering and delivery of an enhanced model of the SR2000 machine. Levering £7m Horizon 2020 funding Scotrenewables will lead an industrial consortium to optimise the SR2000 under the “FloTEC” project which is scheduled to run until 2019.

“Scotrenewables’ latest milestone is typical of the achievements which just keep coming in our cutting-edge tidal energy sector.

“Scotland now has more wave and tidal energy generators in the water than ever before, cementing our world lead in these challenging but hugely-promising industries of the future.

“Scotrenewables’ recent successes, alongside others from leaders like Atlantis’ MeyGen project and Nova Innovation’s tidal power array in Shetland, are just the tip of the iceberg. The global potential of both tidal and wave power is huge, and with the right support from government the UK can reap the benefits of these new industries as they continue to reduce costs and increase generation.”