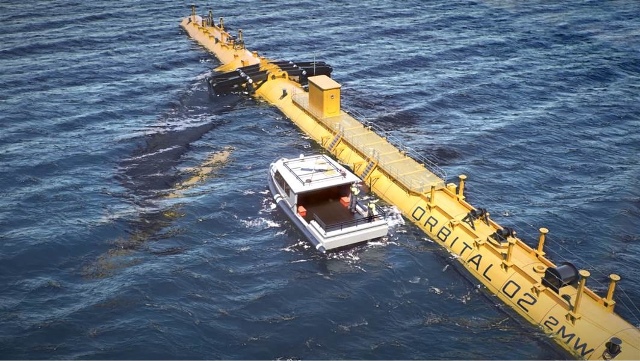 Orbital Marine Power (formerly Scotrenewables Tidal Power) will use the funds raised to build its first production model Orbital O2 2MW turbine, an innovative floating tidal turbine platform that can be towed, installed and easily maintained. The project already has secured a number of supporting grants as well as equity funding, including from the Scottish Government.

The Abundance offer of 2.5-year debentures with an annual return of 12% attracted 2,278 individual investors, with over half investing via an Innovative Finance ISA for a tax-free return. The average investment was approximately £3,000, with the project attracting particularly strong interest from investors in Scotland who put in 50% more on average, at £4,500.

“2019 promises to be the best year yet for the environmental and social investment sector, and it feels significant that our largest investment to date reached its £7 million target on New Year’s Day. The UK can rightly claim to be a world leader in tidal generation technology and our customers have backed it enthusiastically.”

With this new investment, Orbital Marine Power plans to build its Orbital O2 2MW turbine over the next 12 months, for deployment at Orkney’s European Marine Energy Centre (EMEC) during 2020.

The Orbital O2 turbine comprises a 73m-long floating superstructure, supporting two 1MW turbines on either side. The new turbine will draw upon the success of Orbital’s SR2000 turbine which was launched in 2016 and produced in excess of 3GWh of electricity over its initial 12 month test programme at EMEC.

Orbital’s floating turbine simplifies installation and maintenance as risky underwater operations can be avoided, keeping costs and downtime low, while floating systems can be deployed over a wide range of tidal sites in UK and global waters.

“We are delighted with this funding result; it’s a terrific endorsement of our technology and a clear signal that the UK public is hugely supportive of seeing tidal energy brought into the domestic and global energy mixes. The whole team at Orbital Marine are excited to be moving forwards with this flagship project and deliver the first O2 unit for costs similar to offshore wind and so provide the basis for a new and sustainable industry. This a journey we are now honoured to be taking with thousands of new investors, thanks to Abundance.”

“From those who invest the minimum of just £5 to larger investors with tens of thousands to put to work in the green and social economy, each and every one of our customers is playing a part in building a better world while helping achieve their own life goals. We’ve got an exciting pipeline of new investments in a wide range of projects and technologies coming up this year. Expect to see more larger offers like this one as issuers take advantage of the change in EU rules on crowdfunding prospectus limits.”