Their full scale ATIR tidal turbine which has been successfully validated and optimised is currently being towed north from Vigo in Spain and is expected to arrive in Orkney waters in mid-September.

Once the device arrives in Orkney, local marine contractor Leask Marine will install the ATIR at EMEC’s Fall of Warness grid-connected tidal test site. Here the device will be exposed to the site’s strong tides which can reach up to four metres per second, conditions which will allow the ATIR to demonstrate its maximum operational performance.

The deployment of the ATIR is part of the OCEAN_2G project, which aims to test, validate and pre-certify Magallanes’ second generation (2G) 2MW tidal platform. The project is led by SAGRES – Magallanes Renovables’ parent company and the project consortium brings together EMEC, Orkney-based marine services provider Leask Marine, and electrical specialists IM FutuRe.

The 45 metre ATIR was built and launched in Vigo, and features a 25 metre draft which supports two 19 metre diameter rotors. The platform has been designed to be anchored to the seabed by mooring lines at the bow and stern, while the striking yellow and red steel-built tidal platform floats on the surface.

Given the success of the tow testing where 400kW generation was achieved, now the aim is to incrementally build up the ATIR’s power output to 2MW while installed at EMEC, readying it for market. 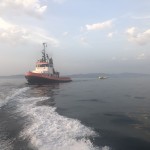 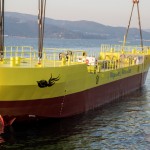 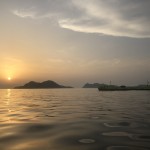 The ATIR being towed from Vigo at sunset. (Credit: Magallanes)

“We are very pleased with the tow testing results and for the ATIR to have now started its voyage to EMEC. This marks a key milestone in the OCEAN_2G project, and brings us a step closer to testing and validating the device and successfully generating electricity through tidal power.”

“We are delighted to be welcoming Magallanes Renovables back to Orkney after the success of their previous smaller scale tests at EMEC in 2014. This project is yet another positive step for the tidal energy market and we look forward to seeing how the ATIR responds to the conditions at the Fall of Warness.”

“We very much look forward to the arrival of the ATIR here in Orkney and performing the installation of the device on EMEC’s site at the Fall of Warness later this month. The Leask Marine project management, naval architecture, engineering, vessel crews and operations teams have been working constantly over the past months both onshore and offshore on the mooring system, cable management and seabed preparation works. Leask Marine’s partnership in the project since 2015 has been in the preparation and planning and the whole team are excited to be involved in the deployment and O&M of the device while it is in Orkney.”

“Following the positive trial tests carried out in Vigo, we are thrilled about the journey of the ATIR platform to EMEC. We hope that the generation tests at are a success and we wish the the OCEAN_2G project the best of luck.”

A video of the ATIR platform leaving Vigo can be found below.

Funding for the project is from the Fast Track to Innovation pilot scheme, part of the EU’s Horizon2020 research and innovation programme.