The project is funded by the Fast Track to Innovation pilot scheme, part of the EU’s Horizon 2020 research and innovation programme.

Since installation, the team have worked hard to prepare the ATIR for grid connection.

The ATIR was successfully connected to the grid via EMEC’s subsea cables and onshore substation on 2nd March 2019, and generated its first power a short time after. The first generation of power is a major milestone within the Ocean_2G project, which aims to test, validate and pre-certify Magallanes’ device.

The device will now undergo a structured programme of testing, which will demonstrate the operational performance of the ATIR, in preparation for readying it to market. 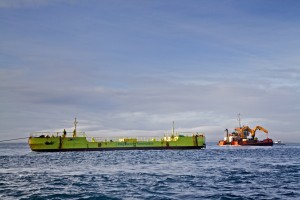 Paul Wheelhouse, Minister for Energy, Connectivity and the Islands, Scottish Government was in Orkney this week for the Convention of the Highlands and Islands. Welcoming the news, Mr Wheelhouse said:

“The marine energy industry has taken momentous steps forward in recent years and it’s great to see this project add to a number of recent success stories where Scotland has been at the forefront of global research and development and tests and demonstrations.

“I’m proud the Scottish Government has been able to support the sector, including the recently announced £10 million Saltire Tidal Energy Challenge Fund to drive towards commercial deployment of tidal energy as well as £10 million committed in the 2019/20 budget from the Wave Energy Scotland programme. Access to European funding has been central to the Ocean_2G project and underlines the importance of continued access to such funding for Scottish based initiatives.”

“This is a tremendous achievement for Magallanes and Ocean_2G partners, and we look forward to witnessing the pioneering 2 MW ATIR prototype in action, as it takes the tidal sector another leap forward towards commercialisation”.

“We are delighted that the ATIR has been connected to the UK grid and is now producing electricity. This is a very exciting period in the project, and in the last two weeks we have proven the viability of our floating tidal platform concept. Not only is the ATIR surviving the strong tidal currents at Fall of Warness but it has generated power from them.”

“The marine operations to connect the ATIR at the weekend went smoothly and is a great achievement for our dedicated and professional team here at Leask Marine, and after years of close working with the Ocean_2G partners its fantastic to see the tidal platform in Orkney and proving its design concept.” 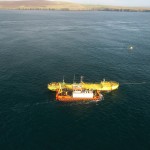 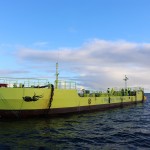 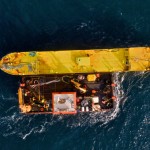