Amongst the blizzard of publicity around the deployment of the Microsoft data centre in the water at EMEC a question kept coming up in interviews ‘…. er … why do it in Orkney of all places?’

Surprisingly it took a few goes to get an answer to that question and there are hard discs somewhere in the BBC with the out-takes that are testament to my stumbling attempts to reply. Indeed, part of the problem was that there are so many reasons to do it here and getting it down to a sentence proved impossible: BBC News – ‘Microsoft sinks data centre off Orkney’

In the end only the ‘we are powering it with renewables’ part of the answer was used. What couldn’t be crammed into the 10 seconds was:

But the fundamental point is that if we had not built this innovation focussed test centre back in 2003 then this project would simply not have happened in the UK, let alone Orkney.

And of course, the idea of using the sea to cool a data centre was not on the minds of the original designers of EMEC, (Who had even heard of broadband in 1999?). They were looking to build a wave energy industry, and then extend it to tidal energy. However, the decisions made then, and the myriad of decisions since, have together built a flexible facility and team that were able to respond professionally to the requests of the world’s third most valuable company.

And that is what innovation is about. Building capability to allow new stuff to be done; capability of place, of things, of minds, of attitude.

So when the email came into our general info@emec.org.uk mailbox from Microsoft it was not immediately discarded as junk by our Admin Support Officer, but flagged as a possible project. EMEC’s Business Development team opened up discussions with the Microsoft team in Redmond and over time a scheme was developed that led to Naval Group building the casing and managing the project overall. Our Operations Team pored over plans from the contractor, reconfigured the site for the new project and procured the data connection.

And then we stood back and gave everybody the space to do their thing, confident in the knowledge that this now had the best possible chance of succeeding. And it worked.

So, is this blog a bit self congratulatory? Well maybe. But it is really intended to remind everybody that the success of this project was no accident. It took a legion of people in all the companies involved to pull this off and they all deserve the credit for their part in this amazing feat.

The only remaining question is ‘What next?’ 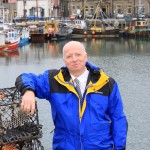