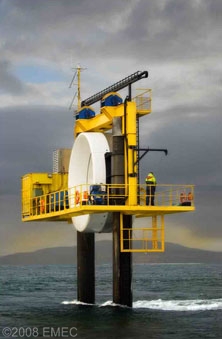 The Open-Centre Turbine is the first tidal technology to reach the stage of permanent deployment in the Atlantic Ocean and represents of 10 years design and development work. It will now undergo a comprehensive test programme in fast flowing waters at the Fall of Warness, a channel off the island of Eday, where EMEC has established a new marine laboratory for tidal energy devices.
“This will be the UK’s first grid connected tidal turbine – and we are now well on course to producing the first tidally-generated power for the National Grid,” said OpenHydro chief executive James Ives.

EMEC provides the only facilities in the world for testing tidal and wave technologies and is delighted that OpenHydro has completed the engineering challenge of installing the turbine. Neil Kermode, EMEC’s managing director, said: “This is the start of an exciting new chapter in the development of marine renewables. We look forward to playing our part in the development of technology that can provide a clean, sustainable source of power from the seas around us.”

OpenHydro’s aim is to deploy farms of tidal turbines under the world’s oceans, silently and invisibly generating electricity at no cost to the environment. The commercially deployed machines will be mounted on the seabed, with no part of the structure visible from the surface, and deep enough to avoid interference with shipping. In Orkney, the prototype turbine has been installed between a twin monopile structure, enabling the unit to be raised and lowered. This will allow OpenHydro to test future generations of the Open-Centre Turbine at minimal cost.

James Ives added: “Tidal energy sets itself apart from other forms of renewable energy in that it is completely predictable. It is the fastest growing emerging technology in the renewable energy sector and is set to make a major contribution to the security of energy supply and to carbon free energy generation.”

OpenHydro will now begin a period of testing the turbine at EMEC, which is scheduled to last several months during 2007.