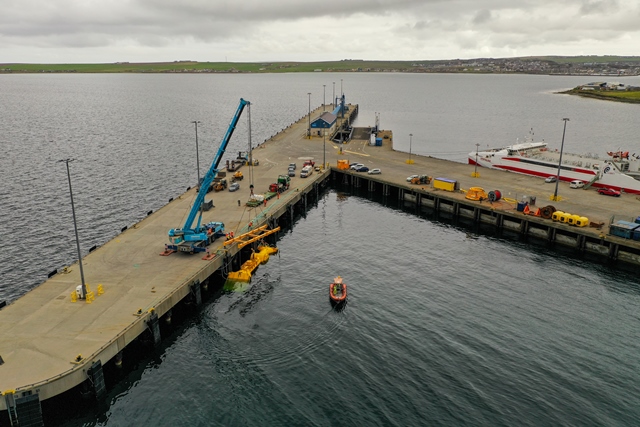 Mocean Energy’s Blue X wave energy prototype has been unloaded at Hatston Pier, Kirkwall, Orkney in advance of sea trials which will take place at the European Marine Energy Centre (EMEC) this summer.

The 20-metre long, 38-tonne wave machine has been fabricated wholly in Scotland and was transported by road from Rosyth to Aberdeen and then by ship to Orkney. In the coming days Blue X will undergo trials in Kirkwall Harbour prior to being towed anticlockwise around Orkney to Copland’s Dock, Stromness.

The machine will then be deployed at EMEC’s Scapa Flow test site for sea trials initially, and then later will move to the grid-connected wave test site at Billia Croo, on the west coast of Orkney.

Next year, the wave pioneers plan to connect the device to a subsea battery which will be used to power a remotely operated autonomous underwater vehicle (AUV) – with potential applications in the offshore sector.

The deployment and demonstration of the Blue X at EMEC is being funded by Wave Energy Scotland and supported by Interreg North-West Europe’s Ocean DEMO project.

“This is a significant moment for Mocean Energy as our first prototype moves towards operations at sea – where all of our computer modelling, design and engineering will be put to the test.

“Our programme at EMEC will allow us to prove our concept at sea, particularly that its novel hull shapes will produce more power than traditional raft designs.

“We are working with Orkney-based partners including EMEC, Leask Marine, Heddles, Orkney Harbour Authority, and Orcades Marine, each of which has significant experience in testing at sea and operating in Orkney, and we very much look forward to learning with them.

“This demonstration of credible wave technology is the culmination of years of work, and I am extremely grateful to Wave Energy Scotland for providing the funding and support which has allowed us to reach this point, and to the Ocean DEMO project for supporting the demonstration at EMEC.

“Our test programme coincides with the real prospect of a UK market support mechanism for marine energy, which could enable Scotland’s wave and tidal sector to take a global lead at a time when the whole word is seeking new ways to create a net zero future.”

“A very warm welcome to the Mocean Energy team to Orkney. We are looking forward to supporting Mocean’s testing programme here at EMEC over the coming months. The staged approach which has been followed to develop the Blue X device through the WES programme will be continued as it is firstly put through its paces at our smaller-scale, ‘gentler’ test site in Scapa Flow, prior to being subjected to the full force of the Atlantic Ocean at Billia Croo.

“Getting metal wet and testing technologies for prolonged periods is vital to prove performance, reliability and survivability, as well as how to install, operate, maintain and decommission such structures. With more technologies tested here in Orkney than anywhere else in the world, we’ve built up a repertoire of knowledge which can be shared to aid Mocean Energy’s journey, and I’m very interested to see how the Blue X performs and what lessons it will learn.” 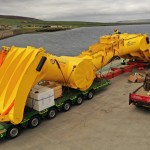 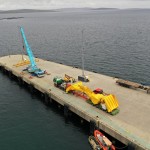 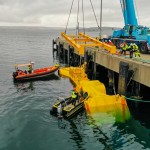 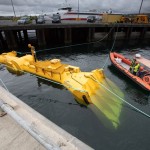 The Blue X manufacture and testing programme is being supported by £3.3 million from Wave Energy Scotland (WES) through their Novel Wave Energy Converter programme.

The Blue X wave machine was fabricated in Scotland by Fife fabricator AJS Production and painted by Montrose-based Rybay Corrosion services. Numerous hardware and services were supplied by companies who have developed capabilities though the WES programme, including The University of Edinburgh who supplied their CGEN generator, Supply Design and Blackfish Engineering Design.