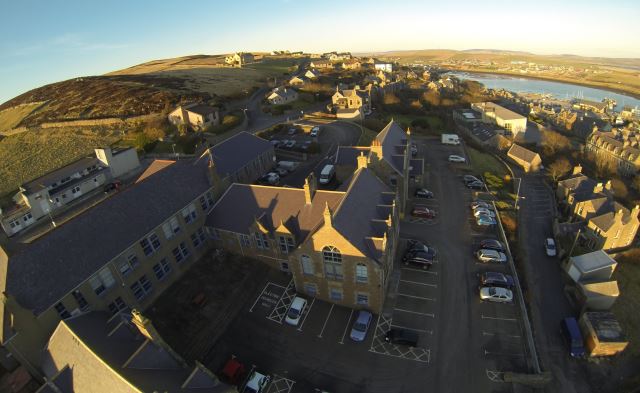 Plans for a multi-million pound research and innovation campus in Stromness in Orkney are set to go ahead after the two organisations behind the venture agreed funding for the project.

The 3.75-acre campus will support the growth of existing research and innovation activity and the expansion of companies in Orkney’s world-leading marine renewables, energy and low carbon sector. It will also attract additional research activities to Orkney, both from the commercial and academic worlds.

Highlands and Islands Enterprise (HIE) and Orkney Islands Council (OIC) have entered into a partnership agreement and today (Monday 9 January) announced the support they are providing to establish the campus.

The HIE Board has approved up to £5.15 million for the project. This includes £1.48 million of European Regional Development Fund (ERDF) money administered by HIE.

Orkney Islands Council is to provide £1.5 million in funding. The Council will also transfer the ownership of the Old Academy and former Stromness primary school to the partnership.

The two adjoining buildings will be refurbished, updated and extended to create the campus. The aim is to attract academic institutions and businesses with an interest in carrying out a wide range of research projects in an island setting. This could include research linked to Orkney’s energy resources, transport needs, culture and economy.

“They are supportive of our joint venture with HIE and will benefit greatly by having their existing facilities upgraded,” said Councillor James Stockan, Chair of the Council’s Development and Infrastructure Committee.

“By adding in the former primary school, and modernising both buildings, our aim is to create a 21st century centre of excellence in a stunning setting, overlooking the harbour in Stromness.

“We are in discussion with a number of organisations who are actively considering making use of the facilities at the new campus. We are confident that this project will lead to new jobs and activity in Stromness, which will greatly benefit the town and Orkney as a whole.”

“I’m pleased to support this investment to support existing and new SMEs based in the Islands. We made clear in both our Economic Strategy and Programme for Government the importance of investing in rural areas. I’m sure that this investment will increase the competitiveness of Orkney Islands in the marine renewables sector, encourage business diversification, growth, inward investment and foster international partnerships.

“The overall economic climate has changed as a result of the EU referendum, which is why we are determined to pursue every avenue to secure Scotland’s continued place in Europe and the stability, jobs and investments such as this.”

“This is a huge investment in Orkney’s future business and academic infrastructure, the impacts of which will be felt across Orkney. It will support the growth of existing businesses and the creation of new enterprises. Crucially, it will provide more opportunities to attract and retain young people looking to live, work and study in the islands. We are delighted to offer support and look forward to a long term partnership with Orkney Islands Council in bringing this important development to fruition.”

The next stage of the project is a planning application. It is intended that work to create the Orkney Research and Innovation Campus will begin on site before the end of 2017.