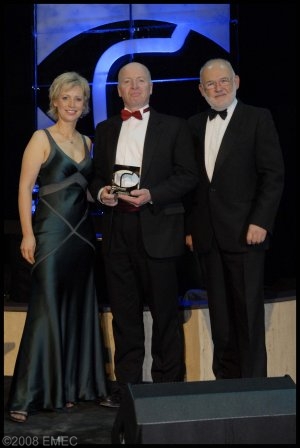 The European Marine Energy Centre’s world leading role in pioneering tidal power generation has been saluted with a prestigious Green Energy Award. Orkney-based EMEC scooped the Best Renewable Innovation Award at the Scottish Renewables Green Energy Awards 2007. The award is in recognition of EMEC’s achievement in creating the world’s first test facility for tidal energy technologies. The tidal test site, off the island of Eday, was opened by First Minister Alex Salmond earlier this year.

EMEC managing director Neil Kermode said: “We’re delighted to have won such a prestigious award. It provides further validation of the world leading role that EMEC, Orkney and the Highlands and Islands have to play in this vitally important new energy sector.”

Irish company OpenHydro has successfully installed a tidal turbine at the test site, where the tide runs at eight knots (four metres per second) through an offshore channel called the Fall of Warness. “The pioneering work done by OpenHydro has been a model of determination and good organisation” Mr Kermode said. “But they wouldn’t be doing this work in Scotland without the vision of our funders in creating EMEC. The dream of generating substantial amounts of energy from the sea is now within our grasp. We are determined to make it work and this award provides an excellent illustration of why it remains vitally important that we all continue to invest in the marine energy sector.”

The Best Renewable Innovation Award is sponsored by Scottish Enterprise and recognises EMEC’s pivotal role in enabling Scotland to become a world leader in tidal and wave energy generation.