Bluewater to test at EMEC 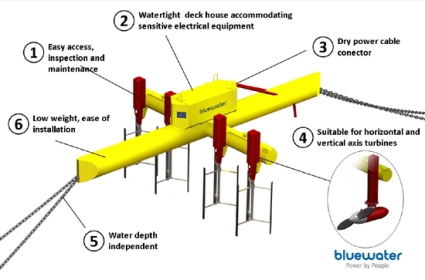 EMEC is delighted to announce that the Dutch offshore energy company, Bluewater Energy Services, has secured a tidal demonstration berth at the Fall of Warness tidal test site for demonstration of its floating Tidal Energy Converter, BlueTEC. Bluewater has successfully completed its development and design phase including model testing and is now ready to enter the market with a full scale demonstration unit.

Tidal energy is in its early stages of development. While most tidal developers concentrate on the development of turbines, Bluewater has developed a solution to install and maintain these turbines in the oceans at the lowest possible cost.

“We are really proud to have achieved this stage of maturation of our Bluetec development” says Allard van Hoeken, Bluewater’s New-Energy Manager. “Right now, the tidal industry is starting to recognise the substantial benefits of the floating support for the turbines. Farm developers want to see the system in reality before selecting it as their preferred solution. Therefore we are excited to demonstrate a full scale Bluetec system to the world”.

BlueTEC is a floating support structure suitable for any type of tidal turbine. Unlike conventional bottom founded designs, BlueTEC offers significant advantages by accommodating all critical equipment above the waterline, where it is dry and protected, allowing for easy access, inspection and repair. This substantially lowers capital and operational expenditures for any tidal energy project. At the same time energy production increases as the turbines are located just below the sea surface, in the most energy rich part of the water column. Lowering costs and increasing production at the same time is a powerful combination to make tidal energy projects more commercially attractive.

The project is supported by the European Commission Life+ programme. Project partners are Italian turbine developer Ponte di Archimede (PDA) and Environmental Research Institute (ERI), based in Scotland. Talks are on-going with a major electrical equipment manufacturer and an offshore construction and servicing company to join the project.

The Bluewater group of companies has built a worldwide technological lead specializing in lease and operation of tanker-based Production and Storage (FPSO/FSO) systems, and has become a leading provider of advanced Single Point Mooring (SPM) systems. The offshore experience of the Bluewater group is a key advantage for BlueTEC in bringing down costs for tidal energy.