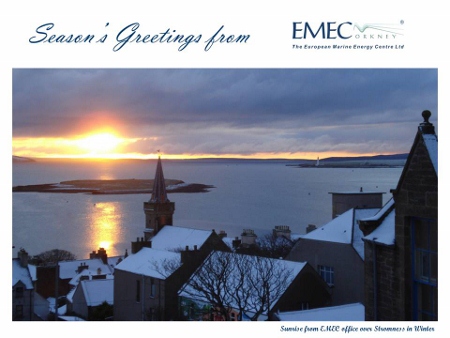 2011 has been the busiest year yet on EMEC’s test sites, with many of our clients completing challenging marine works.

On the wave site:

On the tidal site:

Operations:
The increase in site activity has resulted in the busiest year yet for the Ops Team and a number of other big projects have kept the team particularly occupied:

Research:
Throughout the year, the research team have:

In April, EMEC became involved in the European MaRINET project, coordinating the research and development of wave and tidal devices at all scales and allowing access for researchers and developers into facilities which are not available universally in Europe.

As the year draws to a close, Neil Kermode managing director would like to say:

“I am delighted that the heightened activity in the last year has enabled EMEC to become financially self-sufficient. It demonstrates that the public investment which has gone into EMEC is now generating a healthy return. This is great news not just for EMEC but for the industry as a whole as we look for further development opportunities in the future, further advancing the marine renewables industry.

“Site activity has more than doubled over the past year and 2012 is looking to be busier than ever as we welcome new clients on site. We are looking forward to working closely with our new partners overseas, and will continue to look for further collaborative opportunities as the year progresses. We would like to take this opportunity to say thank you to all our clients, suppliers, government and regulatory agencies, visitors from around the world, and everybody in the local community for your continued support and cooperation.

“We hope you have a very Merry Christmas and a Happy New Year!”