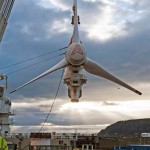 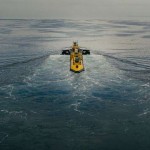 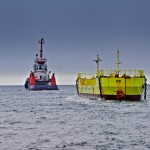 The Contracts for Difference (CfD) scheme is the government’s main mechanism for supporting low-carbon electricity generation helping to boost British energy security and independence with cleaner, more affordable and diverse energy created in the UK.

CfDs give certainty to project developers to invest in new renewable energy infrastructure by protecting them from volatile wholesale prices.

The greatest capacity – almost 7 GW – has been secured from new offshore wind projects around the coastline of the UK, a significant step towards meeting the government’s 50 GW by 2030 offshore wind ambition.

41 MW of tidal energy projects in were granted contracts at a tidal stream strike price of £178.54/MWh:

Today’s CfD awards are a significant step towards securing a future where the UK is powered by cheaper, reliable, home-grown energy, helping deliver on an ambition to see 95% of electricity being low-carbon by 2030, as laid out in the British Energy Security Strategy. Accelerating the deployment of renewables will help solidify the UK’s role as a world-leader in renewable electricity, driving investment in new, future-proof industries, creating skilled jobs and helping reduce emissions across the country. It will also reduce the country’s exposure to volatile global fossil fuel prices that are pushing up energy bills for millions of households.

“The auction showed that the UK is maintaining its position as a world-leader in innovative renewable energy technologies like tidal stream and floating wind which will both play an increasingly significant role in our transition to clean power to meet our net zero goal. Working closely with government, we need to make this country the most attractive place to invest in. This is particularly important if we want to develop our supply chain in new technologies like floating wind, tidal stream and green hydrogen, in which we can lead the global market and seize the export opportunities this offers.”

“Tidal stream is forecast to be cheaper than new nuclear at the point of 1 GW of deployment, supports the UK creating sustainable jobs and supply chains in coastal communities and beyond, whilst boosting energy security through an entirely predictable baseload-style renewable energy resource.”

Claire Mack, Chief Executive of Scottish Renewables, told how the prices achieved today showed how competitive renewable energy can be with the right government support but warned of the reality of building projects such low prices:

“Make no mistake, today’s auction results are a turning point for tidal power, showing as they do that it has a place in the UK’s energy mix. But while the prices achieved in this most recent auction are an incredible milestone, it must be remembered that tidal energy is still in a developmental phase and most developers will be unable to bid so low in future.

“We would therefore urge the UK Government to confirm that its plans for future auction rounds include a dedicated, ring-fenced budget for tidal stream projects and also to commit to reforming the Contracts for Difference mechanism to allow UK supply chain companies to be more competitive.